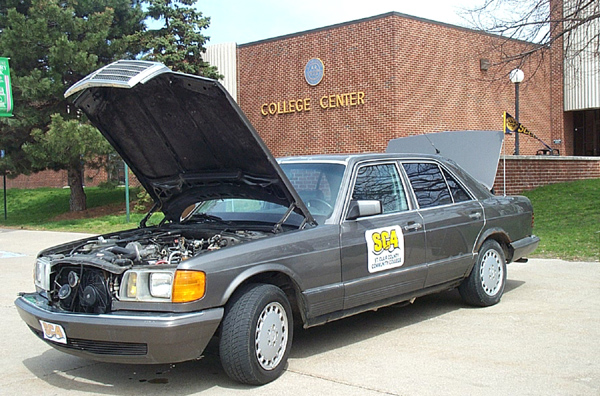 The following is not an official proposal. This is very much an introduction to an idea and it would need to be discussed in further detail.

The SC4 Veggie Car has been a part of the SC4 experience since 2003. If you do not know what the Veggie Car is, go to:

The SC4 Veggie Car has been parked outside for several years, yet the diesel engine still runs great. It runs so smoothly that you can place a glass of water on the engine block and it barely vibrates. Unfortunately, the rest of the car is in bad shape. The brakes are bad, the transmission is bad and the back half of the exterior is very rusty. The very large battery that is needed to start the car is not well-maintained in the harsh outdoor environment. Also, we often have to battle the hornets that love to nest in the door jams and under the hood. The car is not road worthy and it needs to be kept indoors if we want it to be a worthwhile educational tool. The problem is that we don't have endless amounts of interior space to store such a large vehicle. Therefore, the car continues to sit outside and deteriorate.

It would be a shame to discard such a smooth-running engine. One idea is to remove the engine from the car and place it on a rolling platform that could be kept indoors (in ATC) and wheeled outside for student demonstrations. The battery would be well-maintained and the educational value of the display would be of a much higher quality. The engine could still run on diesel fuel, biodiesel or straight vegetable oil (the same as now).

Another idea would be to chop the car from the driver seat on back and make a portable platform out of the front portion of the car. Yes, this is a little unusual, but it would definitely receive attention at college events. The battery and engine could remain mounted in the car just as the manufacturer designed it while the starting mechanism and ignition would also remain in place. This platform could be designed to have a dedicated electric motor to move the platform from indoors to outdoors. The mechatronics students could design a remote control system to drive and steer the entire platform.

More details can be provided at any future meetings.